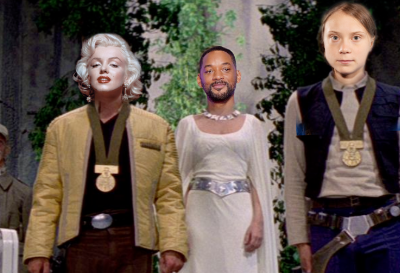 EPIC: DIY Blockbuster Challenge is pretty much what it says on the tin. We have challenged artists cooped up at home to create DIY renditions of famous blockbusters! Using whatever they can find to craft your their own Batman suit, Titanic deck or Jurassic Park and showcase their performance in a night of blockbuster hilarity.

This in an online unlisted YouTube Live event. You will receive the link 48 hours before the event (or after you have booked your tickets if you have booked within the 48 hours).

Alien Jefferson
Star Wars Episode III: Revenge of The Sith
The Dark Side tempts a young Jedi away from the light... Alien Jefferson uses home made footage along with creative stop motion to recreate the magic of Star Wars. This piece was created both in the UK and Denmark.

Matteo Mikkelsen & Nina Laumann
Self Assessment
Exploring the interface between fiction and reality through the life of a tax advisor who is suddenly confronted by mysterious forces taking him somewhere he has never been before.

Women Not Girls
WOM-IN-CEPTION
Through the mediums of physical comedy, home made visual effects and conventional madness, The Women (not girls) focus on recreating the iconic scenes of Inception while helping you understand Christopher Nolan's complex masterpiece.

These Streets Productions
Dirk Haribo: A War Stars Story
When disgraced alcoholic and spaceship captain Dirk Haribo is marooned on Mos Eisley after his pilot's licence is revoked, chaos is the only possible outcome.

Matthew Rawcliffe
I'm not sure who I am. But I've got two dollars and eighty-five cents and I'm hungry.
A Choose-Your-Own-Ending re-imagining of 'Where is Everybody?' from The Twilight Zone

Joao Tosta
Heroes In Lockdown
What would it be like if your favourite movie characters ended up living together? The likes of Tony Stark, Luke Skywalker, Captain America and more are all stuck together because of the Lockdown...but that's not the only problem they'll be facing...